This semester has presented a new challenge to us MTC ladies – our after-school program is 95% boys each day. That means 20-25 boys and (sometimes) one outnumbered girl.

The first week we thought, oh the girls will come! But here we are 6 weeks in and yes we’ve gotten new kids- but you guessed it-more boys.

Was it an adjustment? Yes.

Do we miss our girls? Yes.

Our program might be louder, our games have gotten more hardcore, our lesson time bit more rambunctious.

But now we see God is doing something to our hearts, and these boys’ hearts, and we’re on board for the ride. So we have planned a Man Week October 30-November 2. A week dedicated to what God says a man is.

Culture has twisted what true masculinity is, and suppresses the wild hearts of boys. Sit still, be quiet. That’s how we want our boys to be. That’s what I want most of the time. It’s easier. And there is time and place for that behavior. No one is wrong for expecting that from kids.

But I know I’ve been guilty of wishing they were more still or quiet. Less wild. Less crazy. Less excitable. Less loud. I understand girls- I am one. I understand why they do things. But boys? Sometimes I just don't understand where some ideas and all that energy and wild come from. God's been working on my eyes, though, and He's pointed some things out to me.

The same energy and wildness that makes boys pretend to fight, launch dodgeballs at your face way too hard, make guns out of sticks- is the same wildness that leads them to fight for causes they believe in, to step up and protect their families.

The same crazy that drives boys to jump off the tops of the trees, start fires, make ramps for their bikes, and do all the things that make moms shake their heads, is the same force that leads them to face danger head on.

We call them reckless. But when I sit and consider risky behavior, it came to my mind- who is more reckless than God?

He made a human in His own image of strength and power, meaning that this human could make his own decisions, think his own thoughts, speak what he wanted to speak, do whatever he wanted to do. And God calls it good. (Genesis 1:26-27)

God shared His power with His creations, knowing the risks. Knowing that He gave free will. Knowing they would fail. (Genesis 1:28-31) Because He loves loving people and creations completely and totally. Giving all your love to people who don't always want you back? Seems pretty reckless to me.

But God isn’t just reckless. He is wise and He made His boys for more. He put His love in all their hearts, right next to that roaring wildness. And when we join the strength of their recklessness with the power of His love we get incredible men. Men like Jesus. Men who will fight for what’s right, just like Jesus. Men who will depend on God and do even greater things for people on this earth than Jesus did. (John 14:12) Men who will recklessly love others, like Jesus.

So during our Man Week, we will be celebrating that recklessness. We have been blessed with about 25 future men in front of us. Future husbands, future dads, and future leaders. We will be talking about respecting women, others, authority, and most importantly-God. These boys will be leading families in their futures. We want them to know God has confidence in them to do it, that He has called them to be reckless for Him.

Please ask your boys during our Man Week to talk about and show you what they are learning. Expect them to step up in ways that surprise you!

(What will be doing for any of our beautiful girls who attend program during Man Week? She’ll be getting treated extra special and getting to learn about how she as a future woman is just as incredibly powerful in her own way.)

We are excited to celebrate the wildness of boys, and we hope you are too!

PS- Below is the song that opened my eyes to the wonderful recklessness of God and His boys :) 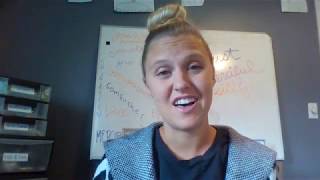